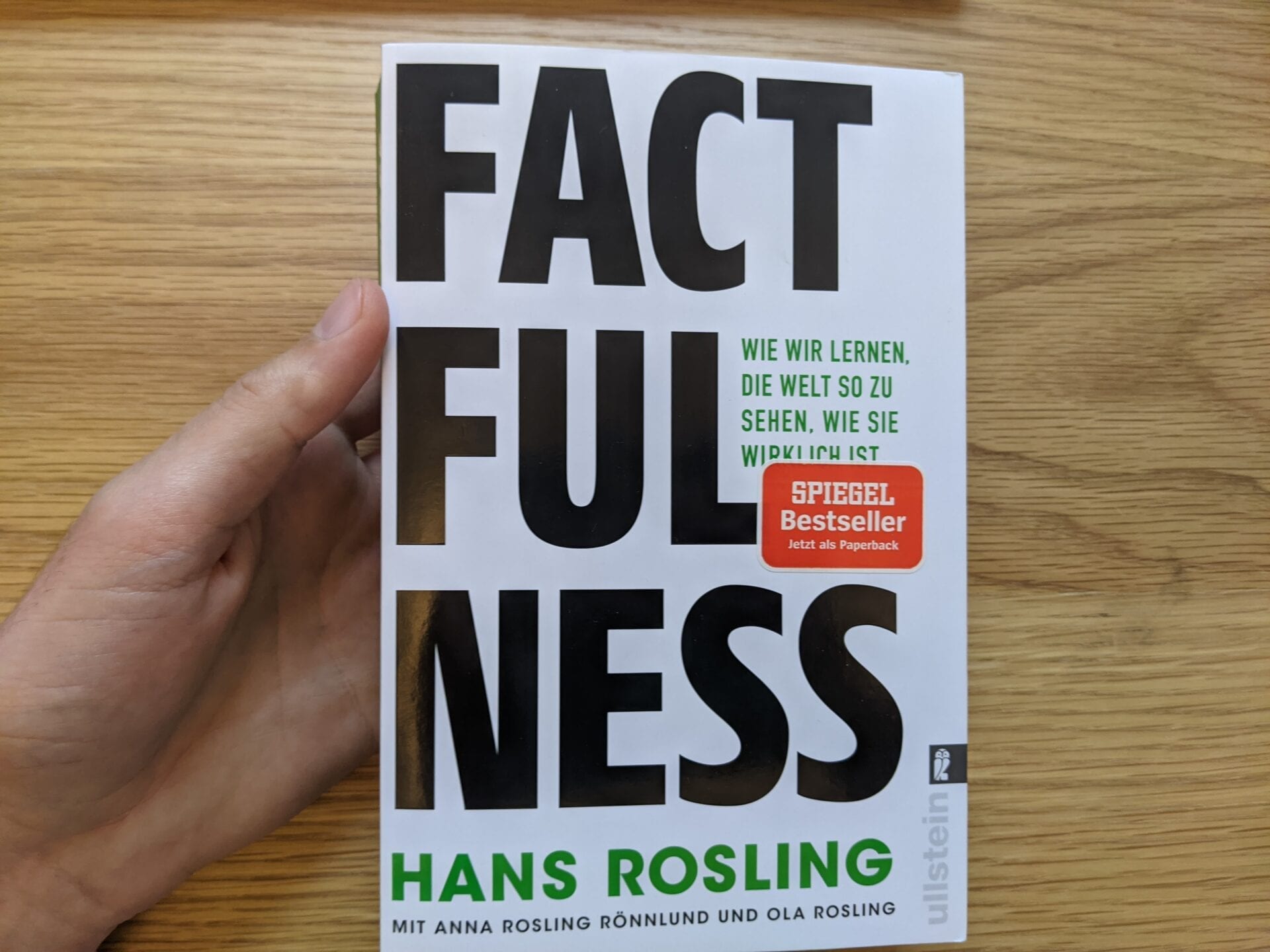 “Factfulness: Ten Reasons We’re Wrong About The World – And Why Things Are Better Than You Think” – what a promising title! And an incredibly important mission in times of alternative facts, fake news and conspiracy myths. Can the book keep what the title promises?

What does it say?

The author: The Swedish physician and statistician Hans Rosling was Professor of International Health at the Karolinska Institutet and Director of the Gapminder Foundation in Stockholm. Through a series of TED talks he achieved more and more the worldwide fame of a science popstar, his life’s work “Factfulness” brings together all these developments and aims to encourage people to think again.

Africa is poor, the industrial nations are rich, the world population is exploding and soon there will not be enough food for everyone.

These are just some of the prejudices that Hans Rosling addresses and charmingly refutes with anecdotes. The book is based on biographical stories of the author, which are repeatedly supported by international statistics. Rosling collected these, among others, with the Gapminder Foundation, which he founded in 2005 with his son Ola Rosling and daughter-in-law Anna Rosling Rönnlund. Dozens of times Rosling has caught me as a reader with my prejudices or entrenched assumptions about connections in the world. At the same time, he has also repeatedly taken away the oppressive feeling of my own stupidity by sharing survey results. They show that very few people in industrialized countries have correctly assessed, for example, the development of poverty or access to education and medicine in “developing countries”. Sometimes even Nobel Prize winners are further off the mark than the median of the population – even chimpanzees often type better than the subjectively influenced geniuses.

And so we learn from reading, among other things, that …

Instead of antiquated terms for states such as First vs. Third World, Rosling has developed a step-by-step model that reflects individual living standards. This includes the thesis that the further one has ascended, the less changes one notices at the lower levels of development. The well-known arrogance of the “West”. To my taste, Rosling always remains undogmatic and respectful, but he perceptibly puts his finger in the wounds of the ex-colonial powers.

In its structure, the book follows different instincts of the people who often get on the wrong track in the networked and media distorted world. One of the reasons for this is our drama filter, which (due to evolution) checks the totality of the information that is coming at us at any given moment to see if it can pose a threat to us. It is this filter that allows itself to be misled by the reporting of many leading media and constantly produces stress signals. Rosling pleads for lifting the curtain and moving away from this very simple approach to reality. In addition, one should orient oneself less towards the classic traits of optimism, pessimism or realism and more towards becoming a probabilist. As a probabilist, it is easier to live your life as you learn to make connections, question presumed facts and make balanced decisions. I can only recommend it.

The first edition in German was published posthumously in 2019; Hans Rosling unfortunately died in 2017, and his son Ola Rosling and daughter-in-law Anna Rosling Rönnlund completed the work. They are also the brains behind the Gapminder Foundation and the associated “Trendanalyzer” software. This was purchased by Google just two years later and since then has been visualizing information on an even larger scale, which comes from reliable sources and statistics.

Humans are severely restricted by their biology if they do not make sensible use of their gift, the cognitive supercomputer in the skull. Factfulness is a refreshing approach to assertions in the media – especially social media – that can help to be less gullible and at the same time less vulnerable. Looking at Facebook comments on certain media reports (especially since Corona) can make you feel sick; if you compare these faux pas of a few cognitively blessed people to how many people are committed to peaceful coexistence, it gets better. That’s a promise.

Trivia: I very rarely listen to audio books. I actually treated myself to factfulness as an audio book and then ordered the paperback.
Recommendation: Absolutely read it!

Chances are that you have already read the book anyway. Not without reason it was on various international bestseller lists for weeks. On Spotify you can get the audio book for free. If you haven’t read or heard it yet, I would like to suggest it to you. And your family. And your colleagues or employees and everyone else you meet. If you have done so, please write me a comment or an email here or give me a call.

All stories by: Kai Gondlach

This site uses Akismet to reduce spam. Learn how your comment data is processed.