You would like to know how the scenario technique is used operationally? Maybe you have read my Flog article about the US presidential elections and that’s why you ended up here. Or maybe you are interested in the implementation of one of the most important methods of scientific futurology for other reasons. I do not want to disappoint you: Here you will find a quite detailed insight into the approach of the scenario technique.

The application of the scenario technique is, if you are serious about it, impossible to do without software support. Reality is too complex for that – especially when we are in the realm of speculative projections. I am very lucky to be able to use the software EIDOS of the Parmenides Foundation – at this point I would like to thank the foundation once again!

The following basic assumptions were made:

Mode of operation Influencing factors: According to the environmental analysis scheme ESTIMATE, those factors are listed which played a role at the time of the scenarios (end of January 2021) and which will have had a significant impact on the object under consideration. Less relevant areas are ignored and not listed for reasons of efficiency. A total of 79 influencing factors from the fields of Ecology Society eThics scIence adMinistration lAw poliTics and tEchnology (ESTIMATE) were listed.

Here you will find the complete list to fold out:

The next step was to define key factors. These are the factors that were identified as the most relevant after research, discussions and influence/interaction matrix. After deducting the wild cards, a total of 20 key factors were included in the analysis. They are marked in bold at the top, here again as a list and slightly reworded:

For the key factors, in turn, the MECE principle (mutually exclusive, collectively exhaustive) was applied as far as possible. It should be mentioned that some qualitative factors contain only a few dichotomous alternatives for research-efficient reasons, such as the behavior of Melania Trump. 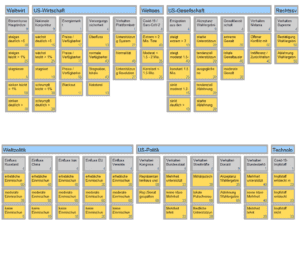 A total of 72 alternative projections were formed, which corresponds to an average of 3.27 projections. Each key factor and each proficiency was also provided with estimated probabilities and the weighting for the scenario analysis. By the way, this step is controversial among futurologists; I decided to take it because of time constraints, even though my evaluation bases are difficult to make comprehensible and I may be putting a strain on the quality criteria of research. If you have any questions about the individual probabilities and weightings, I will be happy to answer them, since the underlying theses can certainly be documented. 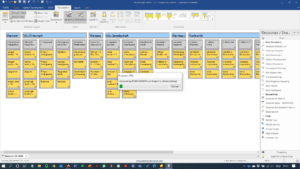 Subsequently, consistency values were assigned for each pair of expressions – how consistent is the coexistence of these two expressions in the scenario at tax x, here January 20, 2021? Such a consideration is impossible to do manually, so I used the software Parmenides Eidos for this purpose. Many thanks for providing the software, dear Parmenides Foundation! 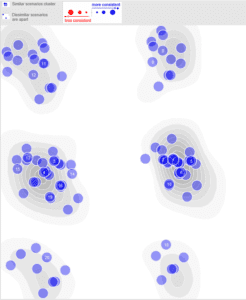 This resulted in 85,030,560,000 possibilities for the combination of all characteristics. The calculation took 2:45 hours with my HP Elitebook 840 G6 (Intel i7 @ 1.8 GHz with 32 GB memory). In the result the analysis delivered 97 raw scenarios. These were divided into six different clusters by the software, which in turn resulted from the fundamental differences in consistency values, probabilities and differences in content. After reviewing the individual values and manual, qualitative checking of consistency and relevance, the 97 raw scenarios were first reduced to one raw scenario per cluster, and finally a final scenario was selected: it bears the order number 70, has a consistency value of 1.44 and a probability rating of +++.

This raw scenario 70 has the following values (in German, sorry): 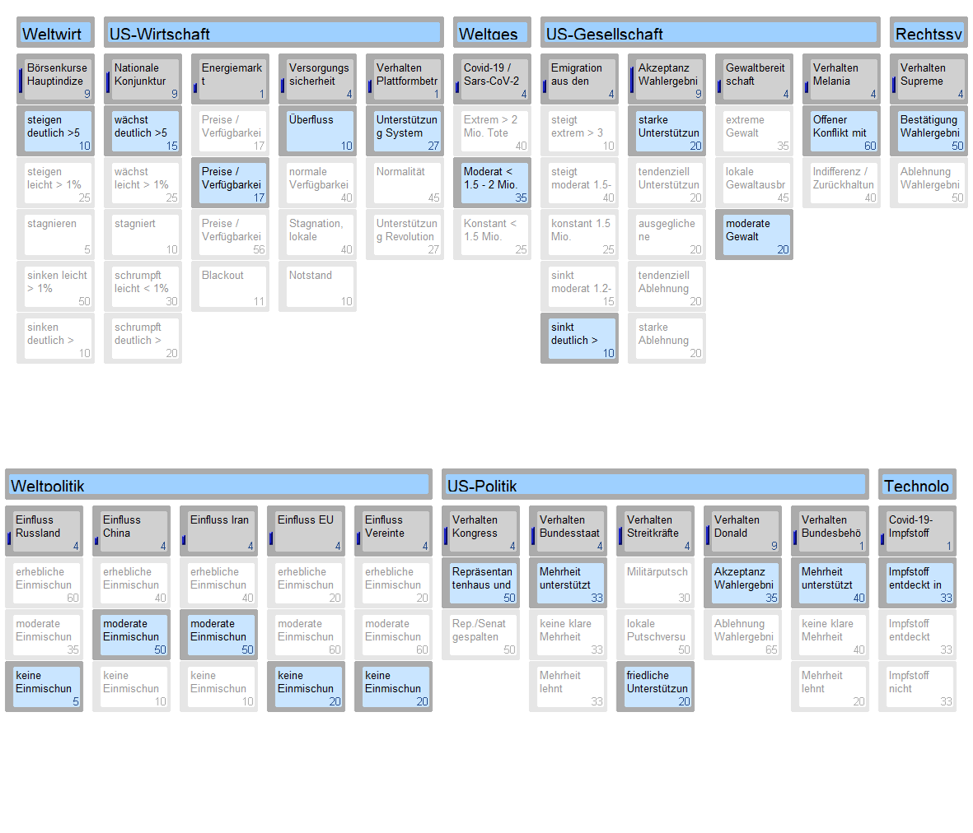 Here are the key factors with the calculated consistent values as of January 20, 2021. At this point, it should be noted that this is not a forecast, but one of many consistent, i.e. contradiction-free, scenarios:

After I had decided on this scenario, I started writing the scenario text. I decided on the form of a newspaper report in order to implement the most important expected developments in dialog format as quickly as possible. You can find the result in my Flog – or have even already found it.

This is how it can happen when future researchers dig deep into their methodological case. Ideally, the scenario technique is only one of several building blocks of a research project. Extensive research is indispensable for the preparation. It is best to conduct (expert) interviews to expand the thesis and eliminate blind spots. Depending on the object of investigation, quantitative surveys are sometimes also advisable.

Feel free to contact me for advice on the appropriate method. I would be happy to support you in your foresight process in the process, strategy or operational area.